The Ravenna Water Treatment system has come a long way since the original plant was built at Crystal Lake in 1885. A detailed history of our water treatment development is below. This chronology shows how Ravenna officials have consistently adopted new methods and processes as technology and standards have evolved. Over the years; as drinking water standards have increased it has dictated the need to consistently improve the facility to meet these new standards. Some improvements to the facility over the years include: A new carbon feed system to help reduce taste and odor compounds, a Clearwell aeration system to reduce disinfection by-products (DBP’s), installation of a Supervisory Control and Data Acquisition system (SCADA) which is a system of software and hardware elements that allows the operator to control processes locally or at remote locations to monitor, gather, and process real-time data. The City, also, over the years has consistently maintained and/or replaced the processing equipment in the plant required to provide safe drinking water.

Our modern facility allows us to meet and or exceed drinking water regulations, which has consistently provided safe drinking water to residential and commercial customers.

Consumer Confidence Reports are required by the Safe Drinking Water Act (SDWA). These documents inform where our water comes from, what the tests show about it, and other details about the water supply quality. The Ravenna Water Treatment system has come a long way since the original plant was built at Crystal Lake in 1885. Water was first pumped from the Crystal Lake plant in 1886 using a steam turbine driven pump. To meet increasing demands and in 1913 a pump station was installed at Muzzy Lake to pump raw water to the Crystal Lake Plant for treatment.

As the years passed, upgrades were performed to the Crystal Lake system and in 1939 a second water transmission line from Crystal Lake to Ravenna was installed. Prior to this upgrade any shutdown or break in the single 16″ supply line resulted in a loss of water to the entire city.

In 1956, in an effort to provide a storage location for treated water as well as to stabilize water pressure, the city’s first elevated storage tank was erected at the City Park on Oakwood St. The addition of this tank also provided continuity of service in the event of an emergency or line break at the treatment plant.

Beginning in the early 1960’s officials started receiving complaints about water quality from Muzzy Lake during certain times of the year.

The Crystal Lake Plant was not designed for treating large quantities of surface water. In an effort to resolve residents complaints and improve the quality and quantity of water three wells were drilled at Crystal Lake between 1965 and 1966 in an attempt to improve water quality.

The addition of the wells improved the taste of the water however the plant was unable to remove the resulting excessive water hardness.

Several studies over the years indicated that the most reliable source of water was the Congress Lake Outlet – Breakneck Creek watershed which supplied Lake Hodgson. When the Cleveland Worsted Mills went out of business in 1957 the city purchased Lake Hodgson, it’s feeder canal, and all appurtenances for $400,000.

Planning for the current Lake Hodgson facility actually began in 1973 when the City authorized Floyd G. Browne and Associates to design a new plant at Lake Hodgson. After several plan revisions and changes of administration the plans were completed in 1981. Additional improvements such as new transmission lines, a 3 million gallon standpipe north of the City and improvements to the City Park elevated tank were added to the project. 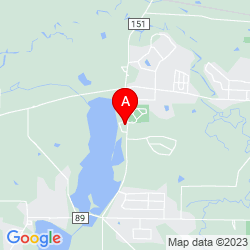